HOW TO MAKE THE MOST OF BOHOL VISIT 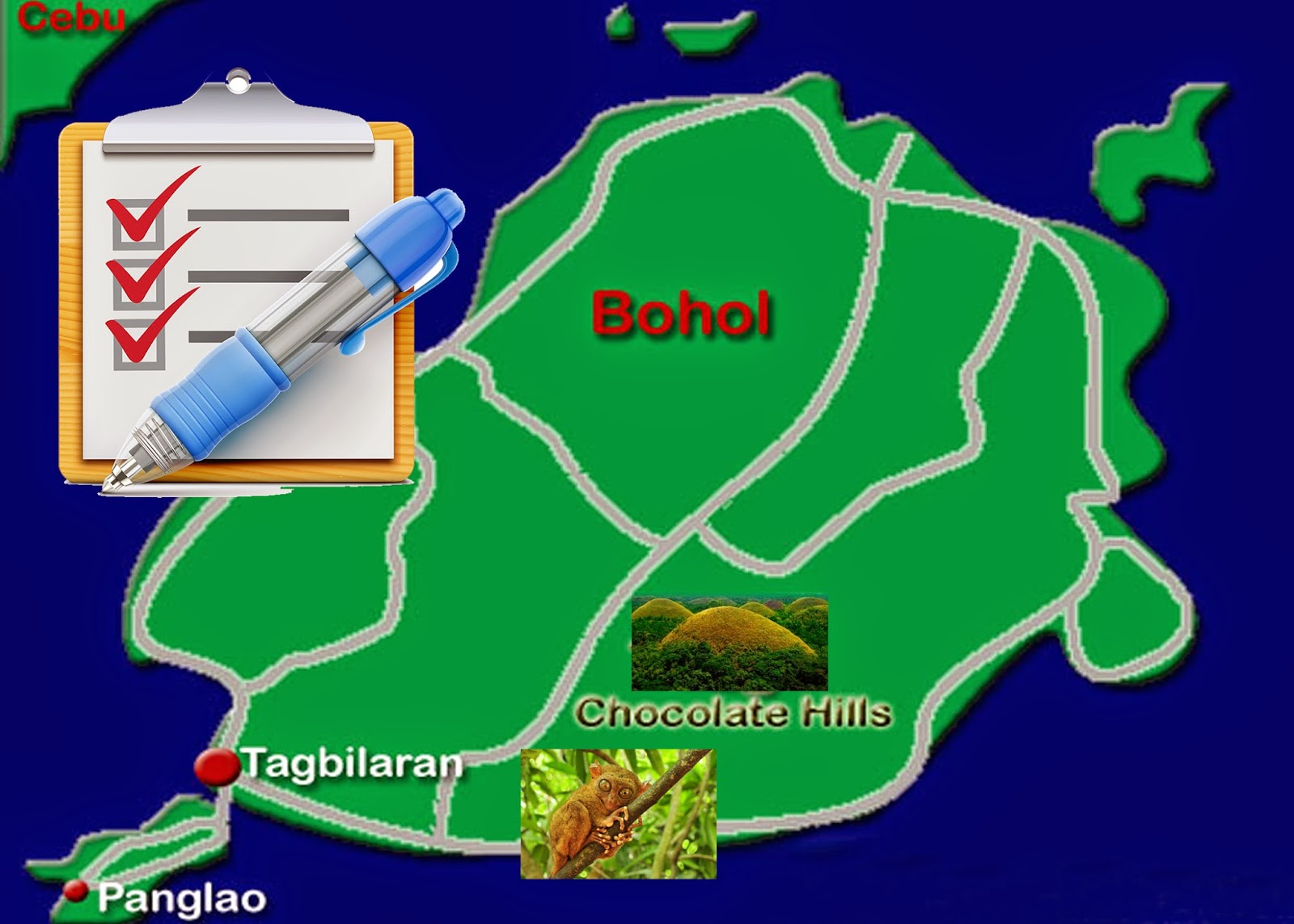 Coming to Bohol on squeezed-tight itinerary, whether for business or just an island skip-trip, here are some quick guides to enjoy the most of the island:

Explore Tagbilaran City for photo stops at the following landmarks:

1.      St. Joseph Cathedral - St. Joseph, the Worker, is the city’s patron saint.  Tagbilaran City celebrated the annual fiesta every May 1 in his honor.

This cathedral isn’t the original church. The original was built in 1595 by the Jesuits. Then an earthquake in 1798 burned the church to the ground. It took almost 50 years before the Recollects reconstructed the church between 1839 and 1855. The Cathedral of St. Joseph the Worker is located in the central part of Tagbilaran City in Carlos P. Garcia Avenue. 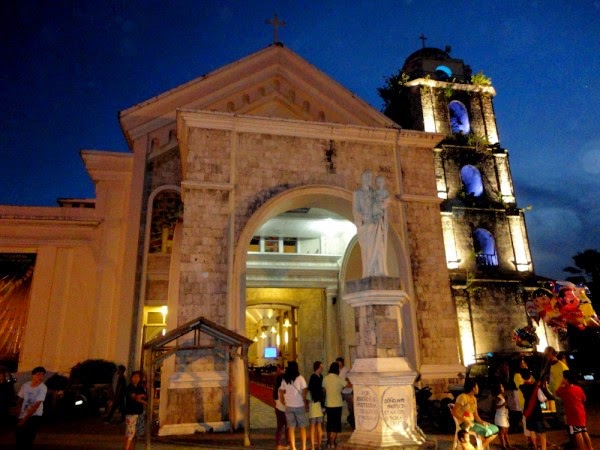 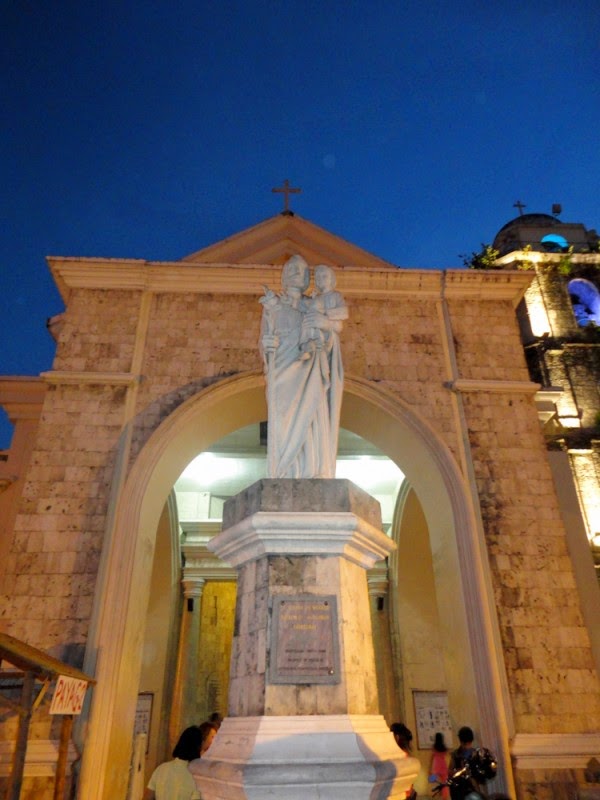 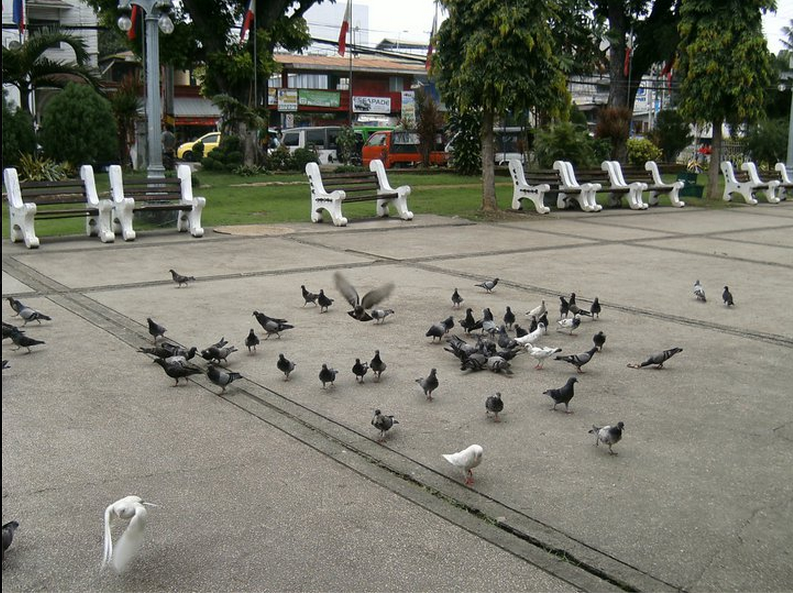 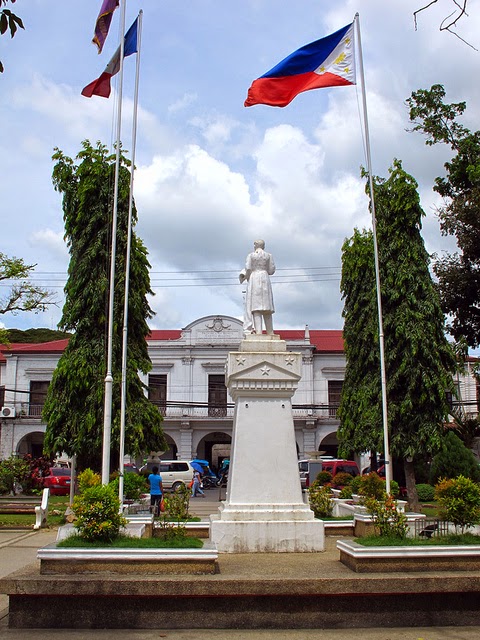 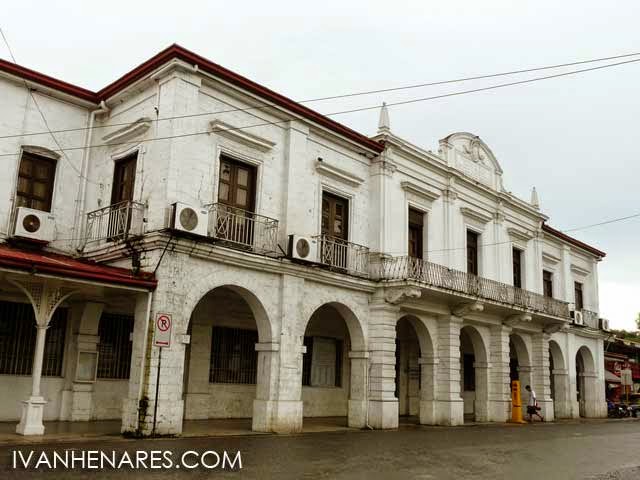 4.      Bohol Museum – For a minimal entrance fee, it is recommended to visit this museum and learn how the chocolate hills were formed with illustrations.  Different seashells, butterflies and the origins of its island people with some skeletons and on display.  Some interesting facts about the world’s smallest primates called the Philippine Tarsiers are readily available therein. It may be worthwhile to visit the place to know some stories behind them before taking closer encounters with these adorable and cute little critters. 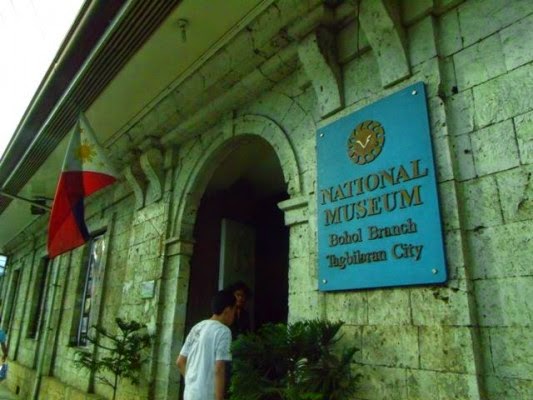 6.      Tagbilaran City Hall – The seat of government of the City of Tagbilaran. The new edifice was constructed in the new and expanded commercial district of the city. 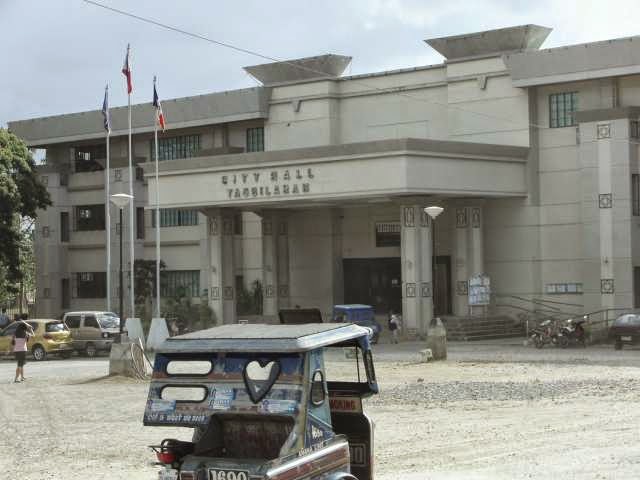 7.      Island City Mall – A shopping center for complete shopping, dining, and entertainment experience while in Bohol.

1. Blood Compact - Blood compact was an ancient ritual in the Philippines intended to seal a  friendship or treaty, or to validate an agreement. The contracting parties would cut their wrists and pour their blood into a cup filled with liquid, such as wine, and drink the mixture.

A famous example of the blood compact was the 1565 Sandugo between Spanish explorer Miguel López de Legazpi and Datu Sikatuna, the chieftain of Bohol. To commemorate this treaty of friendship, the Boholanos held annually the Sandugo Festival thru its month-long celebration every July. 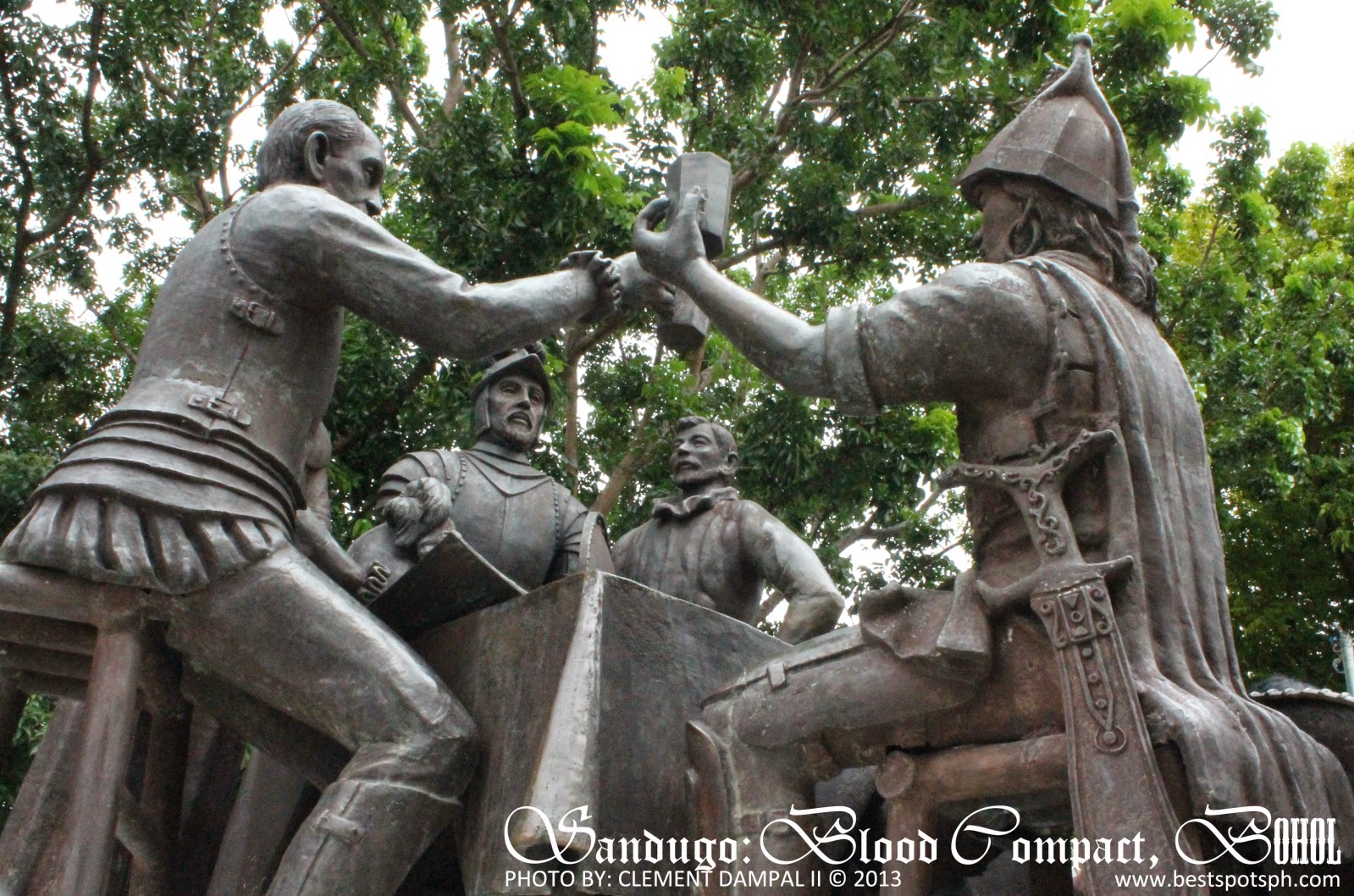 The Baclayon Church, just six kilometers away from Tagbilaran City, Bohol, is the second oldest stone church in the Philippines (the oldest is San Agustin Church, in Real Street, Intramuros, Manila, built in 1571). Constructed in 1595 by the Jesuit priests, it is still intact and houses important relics and images reminiscent of historic Roman Catholic religion in the country. Among those displayed in the church museum are: crystal chandelier, silver tabernacle, altar with carvings inlaid with gold, life-size statues and more.
An earthquake of 7.2-magnitude heavily destroyed this 2-centuries old church although presently, restoration works is ongoing to preserve its original stone structure which has been a significant part of Philippine history and its religious heritage. 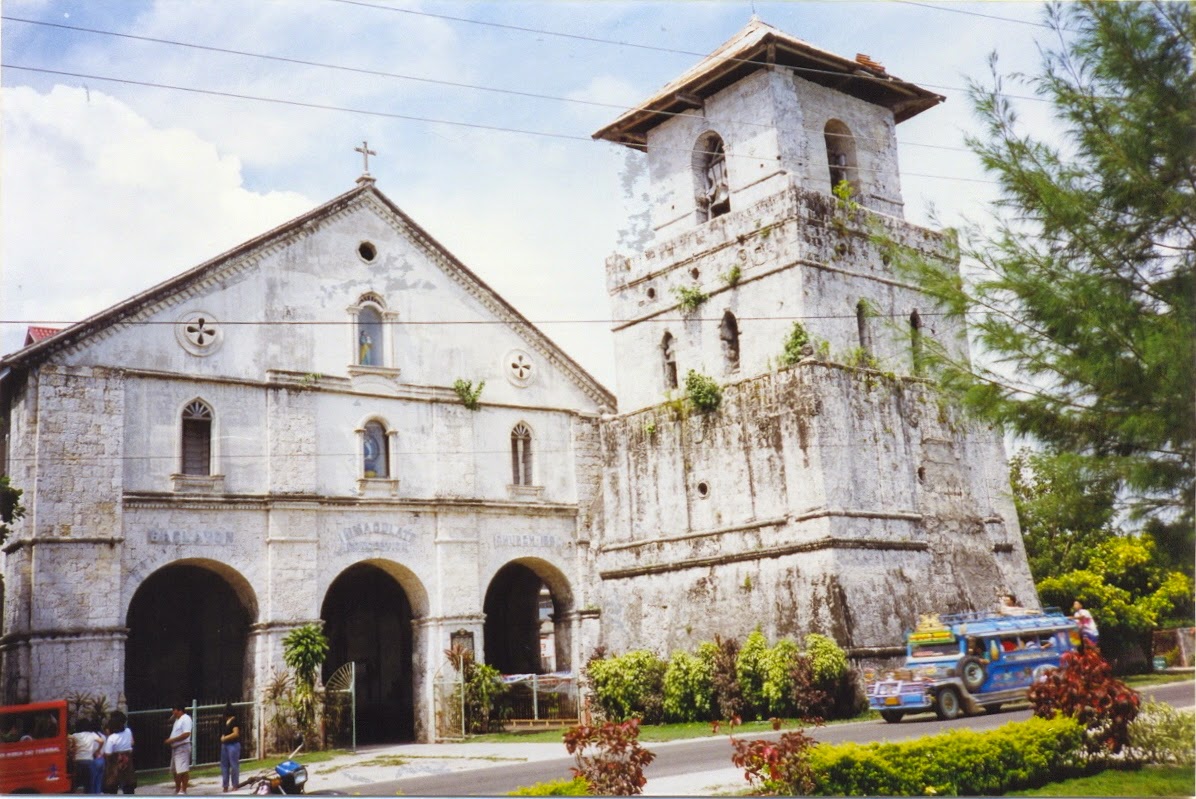 The wildlife park is a fun place to visit and see some of their different animals, birds, and reptiles in captivity.  Experience eye-to-eye encounter with the reticulated python, locally called (Baksan).  It is considered as the longest snake in the world, and dubiously shares with the green anaconda, Eunectes murinus. Reticulated pythons range 10-20 feet in average; the largest one was recorded at about 23 ft and weighed in well over 300 lbs (136 kg).

Its newly tamed reptile, weighing about 5 kls., could be cuddled, carried in one’s shoulder and touched to feel its unique skin.

The Loboc River is one of the major tourist attractions of Bohol where tourist could avail the Loboc River Cruise and experience the beauty and serenity of the river.  Cruises start near the historic Loboc Church at the town proper where many boats are docked and different stores and restaurants line up the riverside.

Loboc is about 30 minutes ride from the Tagbilaran City.  Cruising the river includes buffet lunch and takes about one hour.   It starts with the view of the Loboc River from the docking port.  At the start of the cruise, passenger tourists are invited to take their lunch buffet.  Guests are also offered different tropical drinks including fresh young coconut.  Also on board the cruise are entertainers to provide lively cultural songs during the entire cruise. 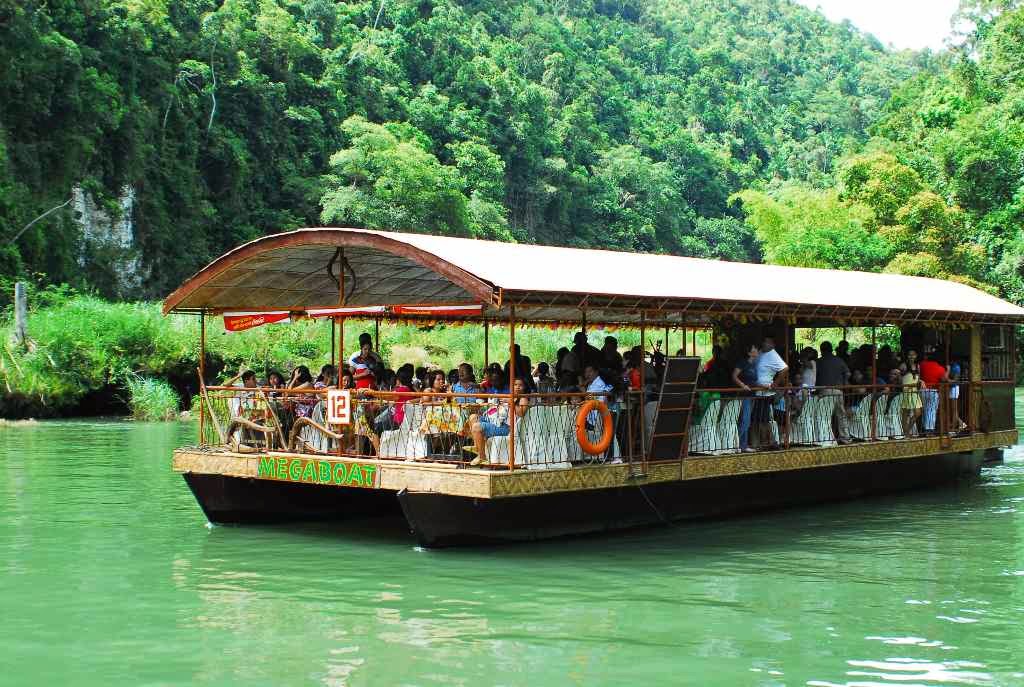 The river cruise ends at the Busay waterfalls, a low waterfall which is one of the contributory river sources.  At mid-point of the cruise, some floating rafts are located where men with guitars and other musical instruments offer guests some music and folk dances amidst the sounds of gushing waters from the waterfalls.
By special arrangement, it could be possible that the world-famous Loboc Children’s and Church Choirs would perform to entertain the visitors aboard the cruise.

The Bamboo Hanging Bridge crossing the Sipatan River in the Municipality of Sevilla, Bohol, is a fun tourist attraction. Originally constructed using just bamboo and rope, today the rope has made way to steel cables, giving added safety and stability. The deck of the bridge is formed out of woven bamboo slats.
The bridge spans around 40 meters and offers a great view of the emerald Sipatan River below. On the far side of the bridge you will find a small shop, selling souvenirs and a welcome cold drink and snacks. Additionally you will find “The Buko King”.  He can strip a coconut (buko) in something like 10 seconds using just his teeth.  He had once shown this talent in a large Germany stadium and was awestruck by his live performance. 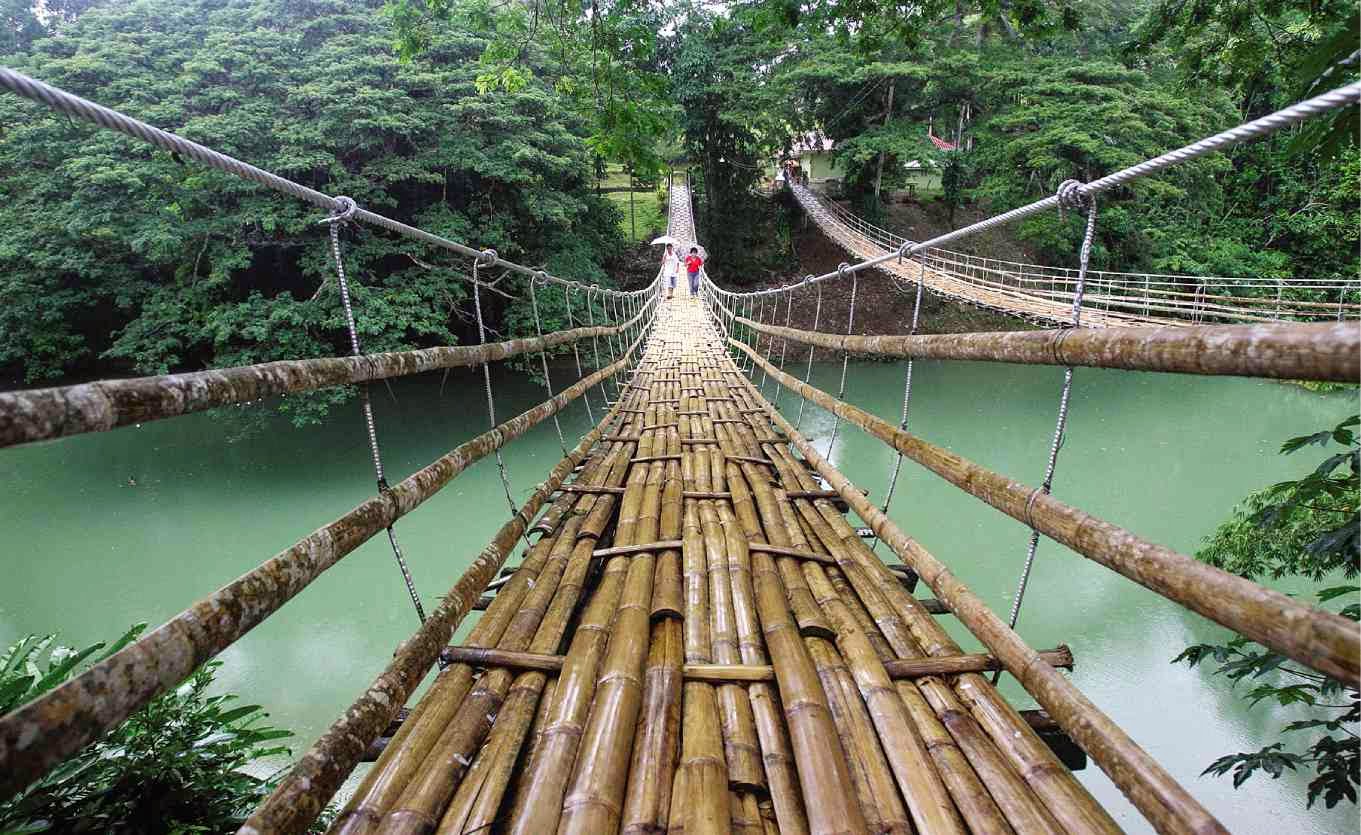 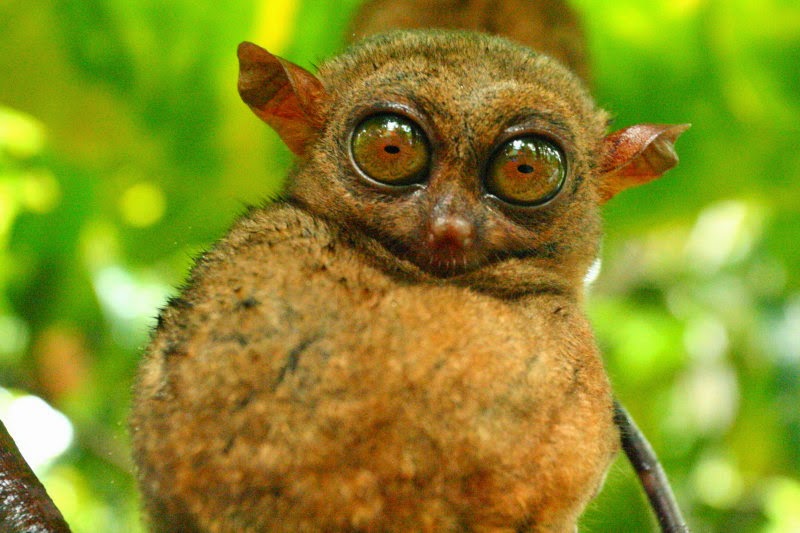 The female tarsier has multiple sets of breasts, but the only functional set is at the pectoralis. The other breasts are used as anchor points for the newborn tarsiers. The gestation period lasts 180 days, or 6 months, after which only one tarsier is born.

Like all tarsiers, the Philippine tarsier's eyes are fixed in its skull; they cannot turn in their sockets. Instead, a special adaptation in the neck allows its round head to be rotated 180 degrees. The eyes are disproportionately large, having the largest eye-to-body size ratio of all mammals. These huge eyes provide this nocturnal animal with excellent night vision. In bright light the tarsier's eyes can constrict until the pupil appears to be only a thin line. In darkness the pupil can dilate and fill up almost the entire eye. The large membranous ears are mobile, appearing to be almost constantly moving, allowing the tarsier to hear any movement.

Bilar man-made forest is one of Bohol’s famous tourist attraction.  Located about 40 km. from Tagbilaran City, tourists bound for the world-famous Chocolate Hills would regularly pass this route.  Tall mahogany trees densely populated this beautiful forest, planted some 50 years ago, and formed a natural canopy from both sides of the national highway.  Stretching about 2-kilometers, tourist would irresistibly pull over to take a look at these uniformly grown species of trees, commune with nature and feel its cooler temperature even at hot summer time! 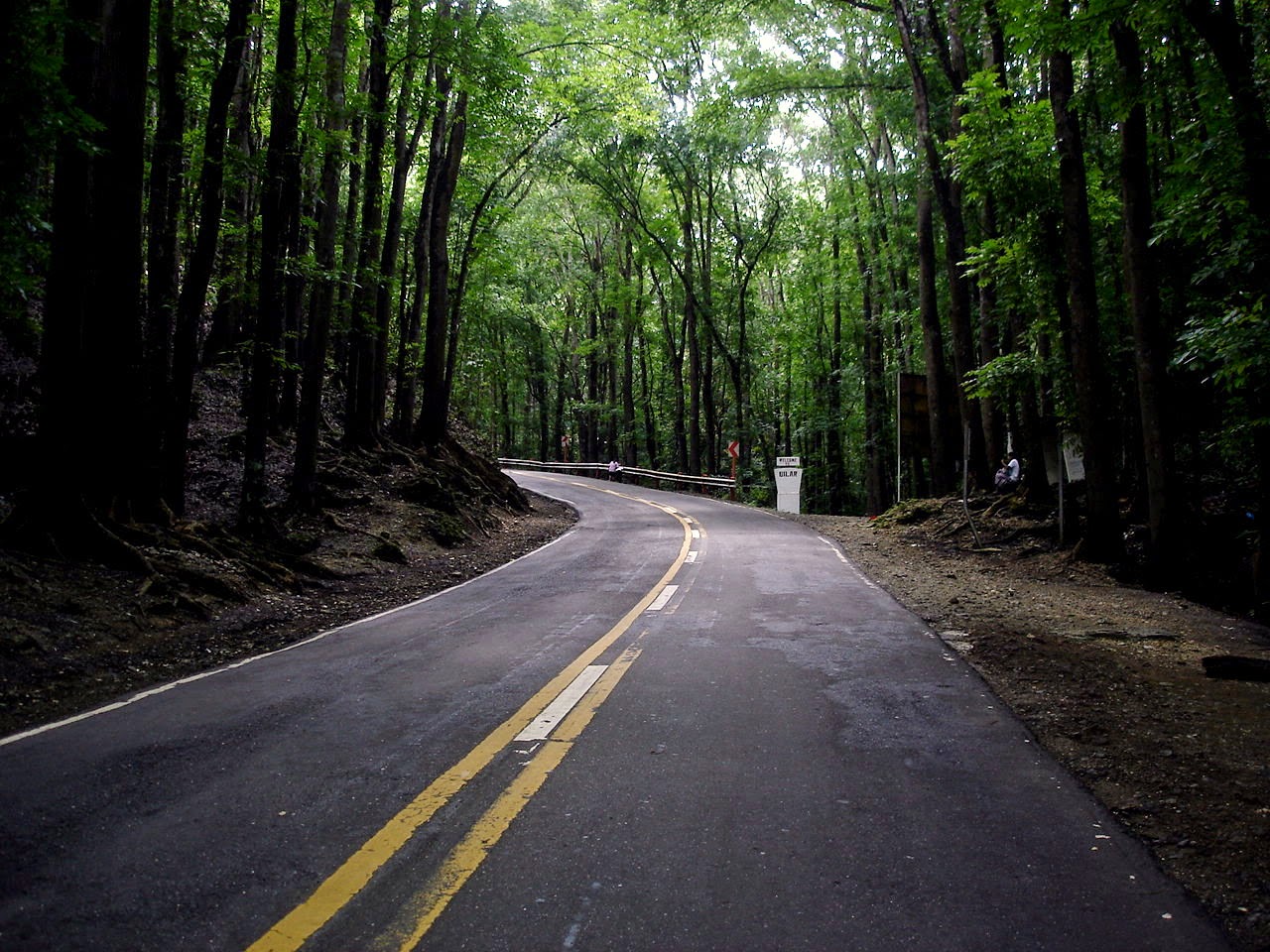 In the town Bilar, some 40 kms. away from Tagbialran City, there is a uniquely created environment called “Simply Butterfly” with a waterfall and shade plants which has now become a butterfly sanctuary. Nature lovers and environmentalist would appreciate the several species of local butterflies fluttering inside the sanctuary and resting in colorful flowers.  Many butterflies feed, breed and play here. 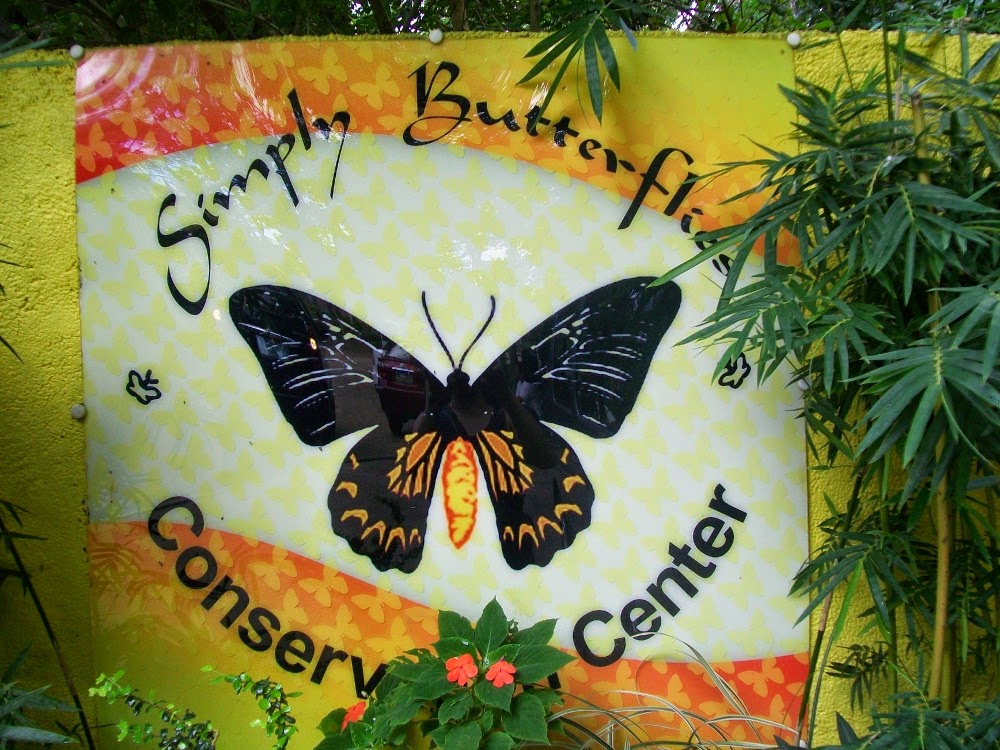 The Chocolate Hills is a geological formation in Bohol Province, Philippines. There are at least 1,260 hills but there may be as many as 1,776 hills spread over an area of more than 50 square kilometres (20 sq mi). They are covered in green grass that turns brown (like chocolate) during the dry season, hence the name.

The Chocolate Hills is a famous tourist attraction of Bohol. They are featured in the provincial flag and seal to symbolize the abundance of natural attractions in the province.  They are in the Philippine Tourism Authority's list of tourist destinations in the Philippines; they have been declared the country's third National Geological Monument and proposed for inclusion in the UNESCO World Heritage List. 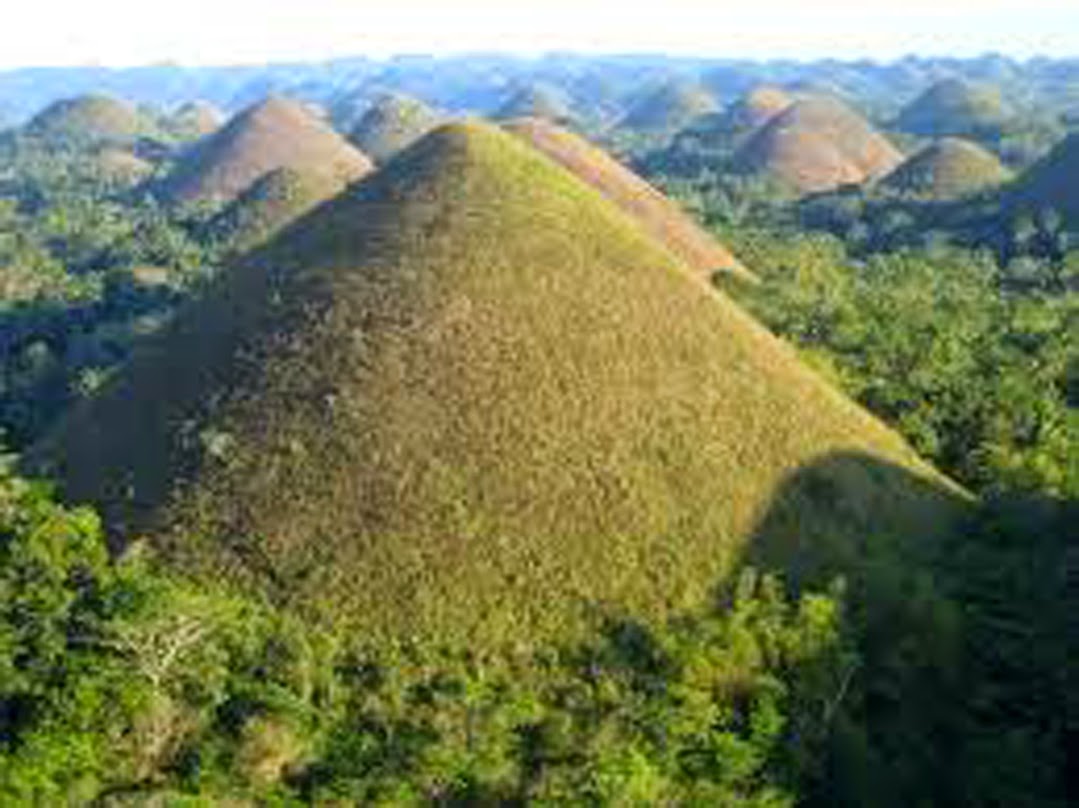 Panglao is endowed with long stretch of white, powdery sands and the clearest, turquoise waters in endless horizons!  Aside from swimming, it is ideal for island hopping and snorkeling/diving.  Panglao is one of the world’s best dive sites with thousands of marine creatures and species. It has also become a perfect getaway to celebrate beach weddings and social gatherings to bask on its beautiful sunset and sceneries.

1.  The Bohol Bee Farm is a very homey and relaxing place in Panglao island. Meals served in the farm are organically-grown vegetables from the farm itself -- from squash muffins, vegetable lasagna, to specially-brewed coffee from roasted corn and wild berries. The Bohol Bee Farm is an agricultural haven situated on top of a cliff on Panglao dedicated to bee cultivation, organic farming, and healthy eating. Aside from growing diverse agricultural produce, Bohol Bee Farm also houses a resort and a restaurant where visitors can take time off from the city and find relaxation while providing livelihood to the local residents. 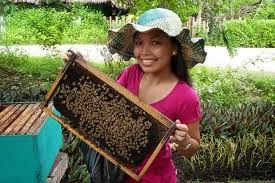 Another beautiful church in Bohol is the Church of Our Lady of the Assumption in Dauis, Bohol, in the Island of Panglao. The basilica-style church is built in a mixture of styles, influenced by both Byzantine and Romanesque architecture. Inside, the ceiling have some impressive frescoes painted by Ray Francia in 1916. The ceiling over the central nave and aisles are coffered woodwork and not tromp l'oeil. Lito Arraya renovated the building in 1970. The church's patron saint, Our Lady of the Assumption, is enshrined at the church apse, protected by a ciborium-like canopy. She is said to possess miraculous powers. An old legend relates that once the town was invaded by pirates, the people of Dauis locked themselves into the church. However, they soon ran out of provisions and water. Then a miracle occurred - a well appeared at the foot of the altar. This same well is still the main source of water for the people living close to the church, and although the well is only a few meters from the sea, the water is absolutely fresh. The water is said to have healing powers.
3.  Hinagdanan Cave

Hinagdanan Cave is a cave in Panglao Island. It is a naturally lighted cavern with a deep lagoon and many large stalactites and stalagmites. The cave is made of limestone and lit by sunlight which filters through holes in the ceiling. The underground lake is a popular swimming spot, but it has been known to test for high levels of various pollutants, since it is fed by ground runoff. Hinagdanan Cave was accidentally discovered when the owner of the area was clearing the decaying branches of the land when he found the hole. The owner throw a stone into the hole, then he heard a splash. Then he built a ladder to get into the cave. They named it Hinagdanan, means "laddered" used to get into the cave's interior. 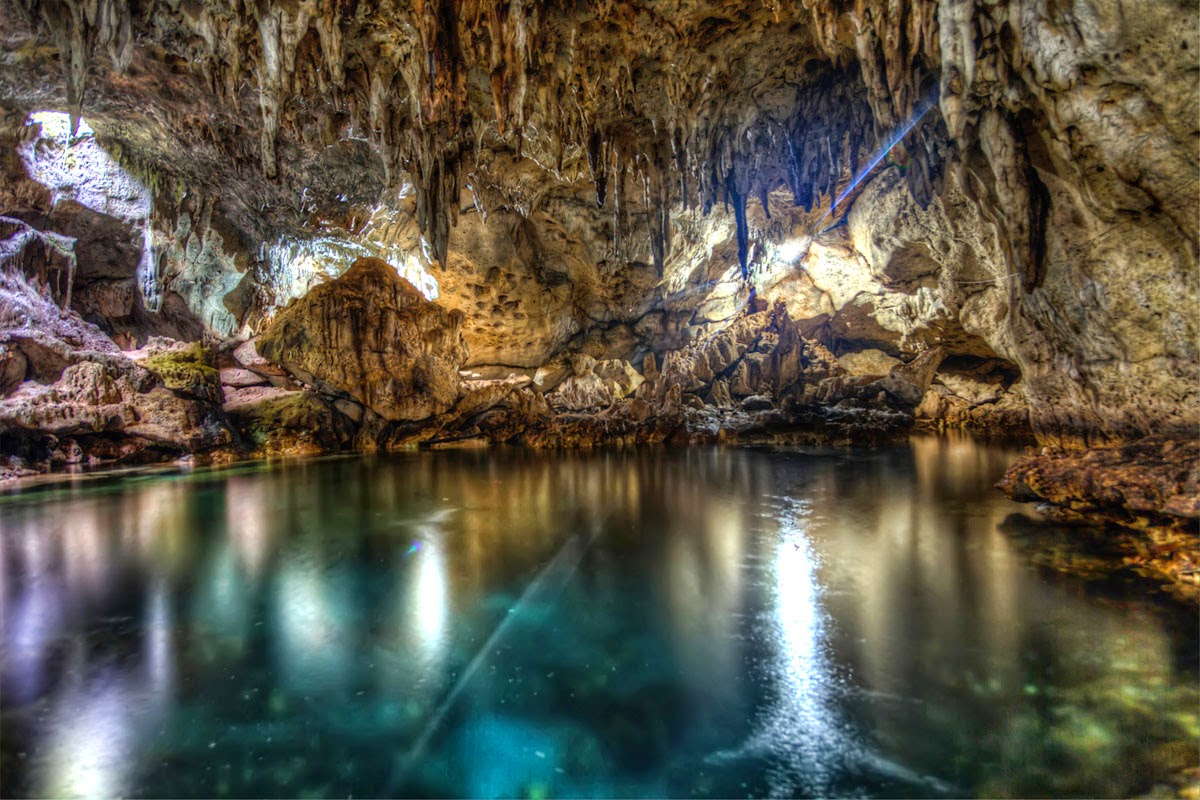 Established in the town of Dauis, Panglao Island and facing Tagbilaran City. Panglao Island nestles closely to the main province of Bohol and is connected to the mainland by two causeways. Located 3.1 kilometers southwest of Tagbilaran, the Dauis Church is visible across the narrow channel from Tagbilaran and can be reached by hiking through a pleasant path, or by riding a motor bike or car. A short walk from the convent’s end leads to the shore where there are sheds that jut out to the seafront, providing an ideal place for prayer and meditation, or for pure relaxation, feasting one’s eyes on the beauty and glory of God’s creation: the often placid sea, the beautiful scenery, the distant harbor lights of Tagbilaran City, to mention a few.

Marcelina’s Guesthouse www.marcelinasguesthouse.com offers clean and comfortable place to stay at very affordable prices.  Room rates starts at Php600.00, good for 2, and it is conveniently located near the Tagbilaran City airport, just a 2-3 min. walk from the airport’s entrance.

Other relevant information are supplied at their websites for the convenience of visiting tourists, especially for first timers.